So our readers know that we are always on the hunt for that next cool thing potentially. Something to enter our setup maybe a more optimal version of something that we already using. In this article we are going to review all new Logitech craft bluetooth backlit keyboard. It’s a little more low-key and it’s a little more low-profile this is a product from Logitech. So  the color of this keyboard is something like low core what Apple would call this space grey at the top and in the black deck below it.  It’s just a nice color combo it’s very dark Vador. It look at the it’s impossibly thin it has almost 962 g only.

The keyboard contains nicely high quality USB type-c cable to charge this up it does work wireless and can pair simultaneously to three separate devices.  With a simple click of the switch on the top. Also in the package as mentioned you can connect via Bluetooth or you can use this 2.4 gigahertz little dongle they call it a unifying receiver. 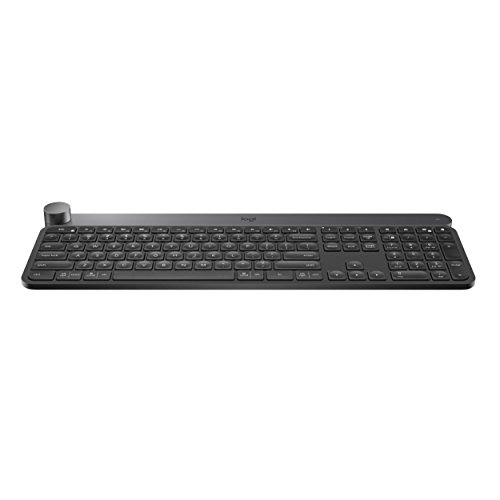 Well the key caps at Logitech craft bluetooth backlit keyboard they have a very strange shape to them they are square key caps but on the inside there’s this divot. This little recess which of course that’s the shape of your fingers. And so even though you’re giving up some key travel here. It has a type-c connector at top and a power switch. When you turn on the green LED indicator lit up.

No there are not any mechanical key switches but there are some crazy features inside of something that’s almost. It’s impossibly thin it’s called the craft from Logitech. And you guys knows that Logitech is not a bad company and there is no need to explain to you about the Logitech love-affair for many people. Just like Logitech MX master mouse this mouse is the most favorite Mouse on planet Earth.

You get some confidence back based on the shape. So it very easy to use for those who do not have proper typing technique. So it’s even more important for people to have the confidence while pressing the Logitech craft bluetooth backlit keyboard keys because we not seen any problem with a lot of low profile keyboards. This keyboard is not for gaming for gaming you need separate gaming mouse and keyboard.

Recently the Logitech app has improved so much for customized ability and that’s where this comes in to join the party. A little bit the craft has a configurable wheel on it. It has a wide wheel.This is same as turning a dial Microsoft did this a while back with their studio products. They had that wheel that you could use for creative input.

So the Logitech options software has gotten so much better in recent years in the past there are many issues with it. But the new version it really encourages you can customize your experience. This Logitech application brings power in Logitech craft bluetooth backlit keyboard. So this application displays your various devices that’s important to know.  You could just continue to use the keyboard the way it is without even installing the application it’ll work like any other Bluetooth keyboard. Once you get into the application and you see the creative control come to life.

The Wheel/Crown. What does this wheel does? :

The main feature of this Logitech craft bluetooth backlit keyboard is the WHEEL. Well in certain applications this wheel can actually control quite a bit and potentially increase your productivity level. It will work with Illustrator, InDesign, Adobe Premiere, Photoshop, Light room and Word PowerPoint. You can also able to configure by you own choice in every application of your choice. You can also use for a zoom functionality or the size of a brush beyond the creative input.

The wheel or crown is touch sensitive. So when you first connect it, by default this wheel is doing volume but that’s really some minor functionality. You can control any thing you want to do with this wheel. The crown is contextual and its adapts to the app you’re using and the tools selected how cool is that.

You can even change the default setting for it prior to tapping it. It can control just within the OS like volume, brightness, next previous cuts, custom keystroke, horizontal scrolling which in a video editing application. For example as how we probably use it the ability to navigate between tabs. Switch between different desktops or pages and of course zoom by tapping on it because it is a physical button.

The Logitech craft bluetooth backlit keyboard also has illumination light which is smart. So if you approach the keyboard, the backlit pops on the works over. It has Bluetooth or a unifying receiver which is in the box works with Windows Mac and mobile platforms. So this keyboard is smart but it has a price tag (check price at amazon). As you’d expect with a product in the premium category with a name like Craft.

So this is kind of an in-between type of solution Logitech has come up with. You can notice multimedia stuff up along the top play pause keys you have your volume controls. You have controls manual controls for the backlit of the keyboard brightness. It is good that they put both Windows and Mac specific keys. All you can got it’s a very simple as a clean-looking thing which is good in our opinion.

It can control play pause mute, show desktop, increase decrease brightness, open up the calculator. When you change it to horizontal scrolling it eliminated the click so it become smooth scroll which is what you would want in a timeline for example navigate between apps. And just like that navigate between apps re enables the clicky factor so you can stop more easily on a specific spot.

You can switch between desktops, if you open up a bunch of tabs you can go wild over a little wheel. But the idea of putting a wheel next to your keyboard so you have a secondary left hand input to go with your mouse this is it’s very interesting for creative applications.

There is an aesthetic component though where maybe if you approach your setup and you find it to be inspiring if it’s giving you positive feedback. And you spend a lot of time there then maybe there is some value associated with the appearance of the thing. But ultimately the angle of the keyboard while working a lot when standing it just gives a different approach. Therefore the low profile keys is just a little easier on wrists at the moment even though for a person who’s probably a little bit of typing accuracy.

From our personal experience we used wheels for that purpose in the past things like editing Suites all over the world but the problem with these is you now have a secondary device somewhere on your desk. You need more space it’s the less clean look for most people won’t justify the space that it takes up on the desk. And maybe they won’t use it of course some people swear by it everybody’s gonna be a little bit different. But you end up with something that’s very slick looking and you hardly even notice this wheel because of the way that it’s integrated.

Logitech craft Bluetooth backlit keyboard is mind blowing you end up with a package like it’s nice it’s slick and it just it keeps your mind on the thing that you’re working on. The location of it hopefully you don’t even have to think about it. It just becomes second nature with the left hand so hence the name of the thing it’s going to be targeted mostly at creative people.

People using creative applications like the illustrators and the Photoshop and the video editing applications. But really we think anyone can benefit from it even in an Excel spreadsheet or even within the OS or even within a browser. So everyone can use it on a daily bases. The design impossibly thin it is the Logitech craft you will pay for it.

Comparison: which gaming console to choose in 2020

Best Laptops For Interior Design In 2020

Best Laptops for Writers on a Budget in 2020